President Joe Biden signed a $1.9 trillion coronavirus relief package in March. The plan authorized direct payment of up to $1,400 to qualifying individuals, an extension of the unemployment insurance supplement and an expansion of the child tax credit. The president also unveiled plans for a $2 trillion infrastructure bill. The size of the stimulus measures raised expectations for a quicker economic recovery but also stoked concerns about rising inflation and government debt. The Federal Reserve upgraded its gross domestic product growth and inflation forecasts, but indicated that it does not expect an increase in interest rates until at least 2023.

Consumer confidence rose to its highest levels since the pandemic began, as an acceleration in vaccine distribution allowed more businesses to reopen. The unemployment rate fell to 6.2% in February, still well above pre-COVID levels. Manufacturing activity grew at its fastest pace since 1983, with the ISM Manufacturing PMI rising to 64.7 in March. Growth stocks lagged value stocks for the second consecutive quarter as investors turned from the high-flying tech sector to more cyclical companies. Apple, Amazon and Tesla were among the larges companies whose share prices declined. The Russell 1000 Growth Index ticked up 1%, while its value counterpart climbed 11%. The energy sector soared 31% in the first quarter, rebounding from a 34% decline in 2020. West Texas Intermediate crude oil prices rose 22%, supported by expectations for more travel in the year ahead. Shares of Exxon Mobil and Chevron advanced 38% and 26%, respectively. Financial stocks also moved higher, lifted by higher interest rates and optimism for the global economy. The banking industry rose 23%, including notable gains from shares of Wells Fargo, JPMorgan Chase, Bank of America and Citigroup. 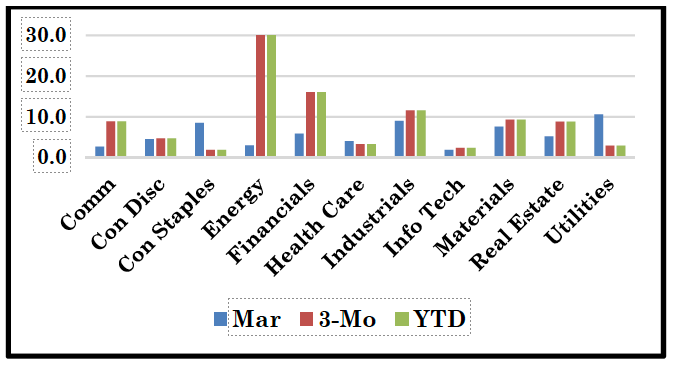 European stocks rose amid investor optimism for a global economic recovery and enhanced stimulus measures from the European Central Bank. In response to rising global bond yields, ECB officials pledged to accelerate the bank’s €1.85 trillion bond-buying program to help ease borrowing costs across the 19-member Eurozone. Italian stocks rallied as Mario Draghi was sworn in as Italy’s new prime minister. The former ECB president, widely credited with helping to preserve the Eurozone, faces a dual challenge of lifting Italy out of its worst economic crisis in a decade while fending off a resurgence of the coronavirus. Most sectors moved higher, led by big gains in financial and energy stocks. Shares of HSBC, Europe’s largest bank, rose 16% while shares of oil giants BP and Total rose 18% and 12%, respectively. Consumer discretionary stocks also posted strong returns, boosted by hopes that Europe’s travel and tourism industry will see a solid recovery in the months ahead. In fixed income markets, Eurozone government bonds declined as massive stimulus measures in the U.S. prompted a sharp rise in global bond yields. Worries about potentially higher U.S. inflation hit Eurozone bonds, as well, pushing benchmark yields higher across the board.

Asia-Pacific stocks rose despite a sluggish recovery. Similar to other developed regions throughout the world, energy and financial stocks led the Japanese market higher, while the health care and consumer staples sectors lagged. Japan’s state of emergency weighed on activity. The government declared a state of emergency in Tokyo and other parts of the country in January as COVID-19 infections surged to the highest levels of the pandemic. Less than 1% of Japan’s population had received a COVID-19 vaccine by the end of March, trailing other advanced economies.

Hong Kong equities rose. Retail sales snapped a 24-month streak of declines with a 30% jump in February. A distressed tourism sector and strict measures to contain the spread of COVID-19 drove unemployment to 7.2% in the December-to-February period.

Australia’s central bank boosted quantitative easing. Policymakers increased bond purchases by another A$100 billion to help contain yields amid a global selloff in government bonds. The government eliminated the JobKeeper wage subsidy, a key pandemic-relief measure, which could test the economy. The Australian dollar fell 1% against the U.S. dollar and the MSCI Australia Index rose 3%.

Gains for Chinese stocks slowed after outsized returns in 2020. While China’s economic recovery continued to show signs of strength, government authorities announced plans to withdraw some stimulus measures and voiced concern about debt excesses. Meanwhile, U.S.-listed Chinese companies debuted on the Hong Kong Stock Exchange. Chinese companies that originally listed on the NASDAQ or NYSE have been listing in Hong Kong amid geopolitical tensions.

While equity markets continued to reach new highs, fixed income markets suffered one of the worst quarters in decades (actually 40 years for U.S. Treasuries). Concerns over the multi-trillion dollar stimulus packages elevated optimism of an economic boom, but escalated fears of rising inflation which caused investors to move funds out of the bond market. Higher expectations for inflation put upward pressure on yields as fixed income investors need to be compensated for the higher inflation risk. Intermediate to long term interest rates moved higher, as the 10 year Treasury reached its highest level (1.76%) in over a year. Higher yields can weigh on economic expansion. While the surge in rates was orderly, the speed of the advancement caused concern as the yield curve steepened from the previous quarter.

In addition to fiscal stimulus and accommodative monetary policy, other factors help contribute to the rise in bond yields during the quarter. New issuance of government debt has been rising each month while foreign investing moderated due to fiscal year end positioning. International markets have experienced the same reaction as the U.S. to potential reopening growth and while rates moved higher, they remain at historic lows and negative territory. As has been the case for quite some time, the spread between domestic yields over other developed nations, remains superior and impacting demand of U.S. debt.

Accommodative Fed policy has been a catalyst for rates remaining low. As vaccinations become more widespread and the expectation of robust economic growth emerges from suppressed consumer demand, upward pressure on prices is certain to occur.

The Federal Reserve has been diligent in keeping inflation worries in check, stressing that the upward pressure on prices would be "transitory" and of inflationary and reflationary pressures should return to trend levels by the middle of 2022. Some believe the Fed may find themselves in an undesirable position should faster GDP growth force policy to play catchup. Fed chief Jay Powell indicated at the March FOMC meeting of the new policy to let inflation run hot for a time to lift the average rate to the 2% target after the below-target inflation levels of the past. Whether it is due to fundamental concerns over supply chain disruptions and bottlenecks or projected demand, the market has seen an increase in commodity prices across the board and companies are indicating those raw material costs will be passed on to the consumer. In light of the March Consumer Price Index, (the largest year over year increase since 2018) that promise is coming to fruition and inflation is poised to move higher.

Congress passed a broad economic stimulus package in March with the American Rescue Plan Act and now President Biden has two more proposals on the table - $2.3 trillion American Jobs Plan and another $2 trillion plan directed for the American Families Plan, bring the grand total of potential spending to $6 trillion. The Jobs plan, which covers broad based infrastructure projects, including roads, bridges, rail and water as well as investing in clean energy, manufacturing, rural communities and high speed broadband. The American Families Plan address social aspects and would extend or make permanent enhancements to several key tax credits and provide universal pre-school, community college tuition, child tax credits, paid family and medical leave and forgiveness of student loans. The plans include the broadest and biggest tax increase since FDR and one of the biggest expansions of federal spending in decades.

On the plus side, investments in infrastructure and education could lift productivity and the economy’s potential growth rate which could lead to stronger GDP. On the other hand, the President’s plan comes with a wide array of tax changes to pay for these widespread programs. For instance, to help close the income gap, he recommends raising the highest personal income rate back to 39.6% from its current 37% for those earning of $400,000 annually and cap itemized deductions for some Americans. Biden's tax policy proposals also included eliminating the step-up in basis for inherited capital assets, which means more taxes on wealth passed to heirs, and increasing tax rates on capital gains for anyone making over $1 million from 20% to 39.6% (which would be even higher once factoring in the Medicare surtax). Currently approximately 1% of taxpayers pay 75% of all capital gains taxes. Also on the table is for the federal estate tax exemption to be increased back to pre-tax reform levels. More estates of wealthy people will be subject to the estate tax if that change is made. Taxing the wealthy isn't the only way to narrow the income gap. Reducing taxes for low- and middle-income taxpayers would help that effort.

In addition to an increase in individual tax rates an increase in the federal corporate tax rate to 28% from the current 21% is being proposed. Some research shows that raising corporate tax rates is one of the most harmful tax changes effecting economic growth. A corporate tax of 28% would put the U.S. toward the higher end of the global corporate tax rate spectrum among major economies, harming U.S. economic competitiveness and increasing the cost of investment in America. It can lower long-run economic output, reducing wages and living standards. Other historical data implies that previous tax increases do not lead to lower returns as the market has either discounted in advance or the economy is receiving government aid to offset.

There are still a lot of unknowns and many more details than can be listed here. With narrow Democratic majorities in Congress, there remains plenty of room between proposals and law and the odds that the final outcome will be lower than proposed is high. It will take some time for Congress to negotiate all the details included in these packages and the timing the new laws take effect is uncertain. CWM is dedicated to keeping our clients up to date on the latest tax policies that may affect your investment decision and long term planning. However, we encourage our clients to consult a tax professional before making any changes.

Please remember that past performance may not be indicative of future results. Different types of investments involve varying degrees of risk, and there can be no assurance that the future performance of any specific investment, investment strategy, or product (including the investments and/or investment strategies recommended or undertaken by Chesapeake Wealth Management), or any non-investment related content, made reference to directly or indirectly in this newsletter, will be profitable, equal any corresponding indicated historical performance level(s), be suitable for your portfolio or individual situation or prove successful. Due to various factors, including changing market conditions and/or applicable laws, the content may no longer be reflective of current opinions or positions. Moreover, you should not assume that any discussion or information contained in this newsletter serves as the receipt of, or as a substitute for, personalized investment advice from Chesapeake Wealth Management. To the extent that a reader has any questions regarding the applicability of any specific issue discussed above to his or her individual situation, he or she is encouraged to consult with the professional advisor of his or her choosing. Chesapeake Wealth Management is neither a law firm nor a Certified Public Accounting firm and no portion of the newsletter content should be construed as legal or accounting advice. A copy of the Chesapeake Financial Group, Inc.’s current written disclosure statement discussing our advisory services and fees is available upon request.