Equity Markets and the Economy

U. S. equity markets had an outstanding year in 2019, with the S&P 500, the Dow Jones Industrial Average and the NASDAQ all reaching all-time highs.  Several factors contributed to the impressive performance.  Negative returns in the fourth quarter of 2018 (S&P 500 -13.52%) were a result of concerns over a slowdown in global growth, tensions over U.S./China trade negotiations, and a rate hike by the Federal Reserve.  At the beginning of 2019, the expectation was for the Fed to continue to raise interest rates over the course of the year, but economic data led to a reversal of monetary policy in the first quarter of 2019, which provided a catalyst for a sharp rebound in the equity markets.

As the year moved forward, the Fed continued to cut short-term interest rates.  In spite of a strong jobs market and the U.S. consumer maintaining solid spending habits, the Fed expressed concerns over some of the same factors that prevailed in 2018: the slowdown in economic activity both here and abroad, a reduction in business investment, and lower inflation expectations.  The U.S. Treasury yield curve also became inverted (shorter-term yields higher than longer-term yields) prompting a debate over the possibility of an impending recession.  But by the fourth quarter, many of those fears receded.  U.S.-China trade talks were heading in the right direction and a deal appeared to be on the horizon.  Globally, economies were no longer deteriorating and investors displayed a renewed level of confidence.  After a third rate cut in October, further action by the Fed appeared to be off the table for the foreseeable future, the yield curve became positively sloped again, and the equity markets rebounded, with the S&P 500 posting a fourth-quarter return in excess of 9%.

Fundamentally and over time, movements in the equity markets are driven by corporate earnings and forward guidance of future earnings.  The S&P 500’s gain of 31.49% for the year was the largest annual gain since 2013, but earnings were flat.  So what were the compelling factors that caused the market and valuations to climb in the absence of earnings growth?

The Fed’s accommodative monetary policy has played a huge role in the advancement of the equity markets and valuations.  There is a direct correlation between the performance of the S&P 500 and the amount of liquidity injected into the marketplace, as the below chart illustrates. 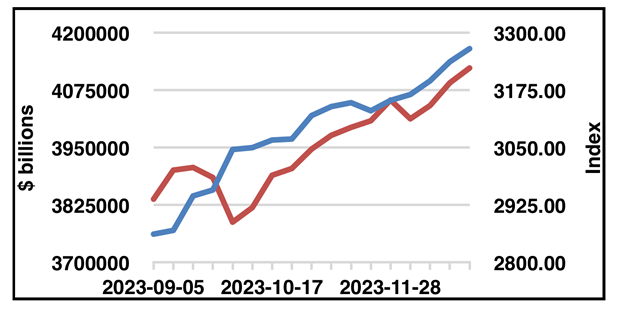 In the second quarter, the S&P 500 was officially in an earnings recession, the first since 2016. (An earnings recession is identified as 2 consecutive quarters of falling earnings.)  And according to FactSet, projections were for a continued drop in earnings into the second half of the year.  However, in the fourth quarter, the financial health of many companies surprised to the upside.  Under-promising and over-delivering, no matter how slight, has proven a way to cut expectations and enjoy a bounce when numbers surpass forecasts.  In addition, share buy-backs have been heavy, thanks to low-interest rates, which can raise earnings by lowering shares outstanding (EPS).  The markets reacted positively to the results and the resilience of the U.S. economy.  Analysts’ expectations for earnings going into 2020 are optimistic, with growth nearing 9%, which would be a healthy rebound from 2019.

Performance across the eleven S&P 500 sectors varied greatly.  The Information Technology sector was the top-performing sector in the last quarter, up over 14%. Health Care recorded the second-highest return, after lagging most of the year.  Financials and Communication Services posted solid gains as well.  On the other end of the spectrum, as interest rates moved higher in December, the “bond substitute” sectors such as Real Estate and Utilities were the bottom two performers.

On a year-to-date basis, again Info Technology dominated the S&P with an impressive return of 50%.  The semiconductor industry led the group, followed by IT services, hardware, and storage.  Of the top 10 performing stocks for the year, 7 were in the Info Technology sector.  With the Technology sector representing 23% of the S&P 500, its contribution to the overall return was significant. The Communication Services returned over 32% in 2019, with interactive media companies and entertainment the top industries.

Growth stocks continued to outperform value over the quarter.  Although large-cap equities were the top performer for the year, small-cap companies enjoyed the top spot for the fourth quarter.  As the year came to a close, confirmation that a trade deal would be signed by both parties, boosted confidence and small-cap stocks (as well as all major asset classes) rebounded on optimism.

Taxable fixed income markets recorded their best annual performance in over 10 years.  In spite of a flat fourth quarter, the bond market returned 8.72% for the year, as measured by the Bloomberg Barclays U.S. Aggregate Bond Index.  Corporate debt fared well in 2019, up approximately 14.5% followed closely by the high yield sector, with annual returns in excess of 14% as well.  Investors appear to have ramped up their risk profile, in an effort to maintain/increase a sufficient level of income since the expectation going into 2020 is for the Fed to remain on the sidelines.

After spending more than 4 months inverted, the Treasury yield curve ended the year positively sloped and reducing the fears of an impending recession.  With the third rate cut of the year in October, the yield curve steepened, with the shorter end falling and the longer end remaining relatively stable.  In addition to the Federal Reserve, central banks around the world were cutting interest rates which provided the markets and the economy with enhanced liquidity. Yields moved slightly higher towards the end of the year as optimism of a U.S./China trade agreement moved forward and the consumer continued to support the economy. But with still over $10 trillion in negative-yielding debt, U.S. bond rates remain attractive on a relative basis.  The 10-year Treasury note has been range-bound for most of the quarter, reaching a high of 1.93%, down from a high earlier in the year of 2.79%.

The Setting Every Community Up for Retirement Enhancement (SECURE) Act was signed into law on December 20, 2019, as part of a $1.4 trillion appropriations bill. The SECURE Act takes effect on January 1, 2020, with a few provisions taking effect upon signing. As a reminder, this law breezed through the House last May before getting bogged down in the Senate for reasons unrelated to retirement policy. The SECURE Act represents the most significant retirement policy legislation since the Pension Protection Act in 2006. One of the premises behind the legislation is that workplace retirement plans provide an effective way for employees to save for retirement, but not all employees have access to a plan. To that end, Congress believed it was necessary to provide new incentives for employers to adopt retirement plans. While there are several new provisions to help people get started on the road to retirement savings, there are also provisions that affect those who are already in retirement. Below are a few of those provisions.

Perhaps the most significant provision is the elimination of the “stretch IRA’. Stretch IRA is a term that was used to describe a technique in which a beneficiary would extend distributions from an inherited IRA over his or her lifetime. This could enable young beneficiaries to extend the payout period from an inherited IRA over decades, spreading out the payment of income taxes over a long period of time.

The SECURE Act effectively eliminated stretch IRAs as an estate planning tool. Effective for deaths occurring after December 31, 2019, funds from inherited IRAs must now be fully withdrawn by beneficiaries within 10 years of the account owner’s death. The old rules still apply for deaths that occurred before this year for the original beneficiary, but once he or she dies, the new rules will apply to successor beneficiaries.

The Act includes exemptions for certain kinds of beneficiaries, including surviving spouses, minor children, the chronically ill and disabled, and beneficiaries who are not more than 10 years younger than the account owner. Note that grandchildren are not included among these exemptions.

Finally, a third provision that may be relevant is an increase in the age for Required Minimum Distributions (RMDs). The Act raised the age of these distributions from 70½ to 72. This will enable individuals between these ages to keep money in their IRAs longer and put off paying income taxes on withdrawals if they do not need funds yet to pay for living expenses. However, the new rule does not apply to those already older than 70 ½ or turned 70 ½ in 2019 (born on or before June 30, 1949). Those individuals must continue or begin taking RMDs under the old rule.

While we are optimistic about 2020, investors should not expect a repeat of last year.  A relatively healthy consumer will help maintain economic stability.  Weakness in the manufacturing sector and in business investment, however, will need to improve.  The Federal Reserve typically refrains from adjusting interest rates in Presidential election years, so they should remain on the sidelines at least for the second half of the year.  Inflationary pressures are expected to remain in the 2%-2.5% range, and corporate earnings will be playing catch up with valuations.  We do expect periods of volatility in both the stock and bond markets but do not anticipate headline risk to become more systemic and begin to drive fundamentals, earnings, valuations, and interest rates. Chesapeake Wealth Management continues to advocate portfolios with broad diversification across multiple asset classes to reduce volatility and enhance performance.

Please remember that past performance may not be indicative of future results. Different types of investments involve varying degrees of risk, and there can be no assurance that the future performance of any specific investment, investment strategy, or product (including the investments and/or investment strategies recommended or undertaken by Chesapeake Wealth Management), or any non-investment related content, made reference to directly or indirectly in this newsletter, will be profitable, equal any corresponding indicated historical performance level(s), be suitable for your portfolio or individual situation or prove successful.  Due to various factors, including changing market conditions and/or applicable laws, the content may no longer be reflective of current opinions or positions.  Moreover, you should not assume that any discussion or information contained in this newsletter serves as the receipt of, or as a substitute for, personalized investment advice from Chesapeake Wealth Management.  To the extent that a reader has any questions regarding the applicability of any specific issue discussed above to his or her individual situation, he or she is encouraged to consult with the professional advisor of his or her choosing.  Chesapeake Wealth Management is neither a law firm nor a Certified Public Accounting firm and no portion of the newsletter content should be construed as legal or accounting advice.  A copy of the Chesapeake Financial Group, Inc.’s current written disclosure statement discussing our advisory services and fees is available upon request.