Login
REMINDER: Scams are on the rise. NEVER give your account information, password, or personal identification to anyone. No matter how urgent it seems.
A A A

Unfortunately, there was little reprieve for the equity markets during the second quarter of 2022. There seemed to be no shortage of volatility as the S&P 500 recorded its worst first-half performance since 1970 and entered bear market territory on June 13th. Global concerns surrounding the Fed and interest rate hikes, high inflation, the war in Ukraine, supply chain issues, and repeated shutdowns in China continued to weigh on the markets. The declines should not have come as a surprise considering inflation reached a 40-year high and the Federal Reserve raised interest rates twice at a pace not seen since 1994.

In terms of market capitalization, large cap stocks outperformed small and mid-cap stocks in the second quarter, as performance was driven by rising interest rates and growing fears of a potential recession. Investors realigned equity holdings to large caps, seeking defensive posturing in light of the increasing risks of an economic slowdown or recession. In terms of sectors, all 11 S&P 500 sectors finished the second quarter with negative returns. Consumer Discretionary reported the biggest loss as it appeared the consumer was reallocating spending habits in light of continued price increases in gas and food, coupled with negative earnings from several large retailers. Technology continued to see declines as the rotation moved away from the higher valued sectors. The Consumer Staples sector was a relative outperformer, followed by the Utility and Energy sectors.  Energy is the only sector with positive performance on a year-to-date basis. 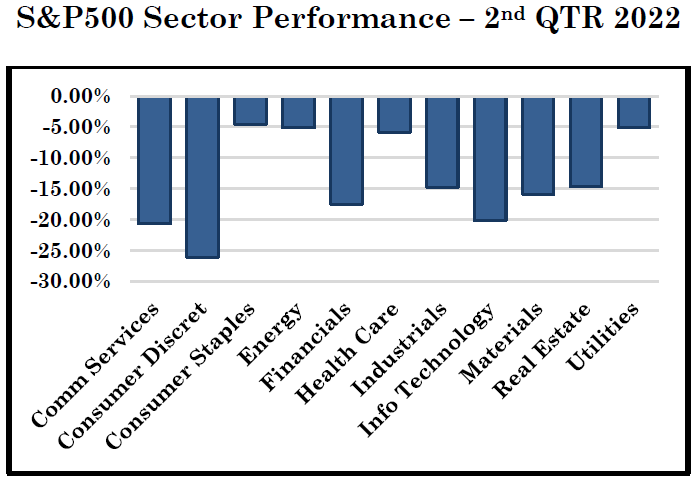 Internationally, foreign markets declined in the second quarter but fared better than U.S. markets. The war in Ukraine continues to restrict supply chains and take a toll on European economies. While foreign central banks will have to manage inflationary pressures, there is an expectation that they will be less aggressive with future rate increases compared to the Fed. Emerging markets outperformed foreign developed markets in large part due to high commodity prices (for most of the quarter) and despite rising global recession fears.

The fixed income markets experienced negative returns during the quarter and year-to-date, as yields moved higher. Over the course of the quarter, interest rates across the maturity spectrum experienced volatility spikes not seen since the global financial crisis in 2009. Rising recession fears weighed on corporate debt, both high-quality and high-yield. With a continuation of negative data, high-yield suffered much worse than their investment grade counterparts.There appeared to be nowhere to “hide” and even safe-haven, short duration bonds suffered from the bond market’s attempt at translating signs of inflationary pressures and a potential economic slowdown. While many are looking for inflation to peak in the near term, it currently remains persistent and the Fed’s mission to fight higher prices leaves little alternative than additional rate hikes with larger increases. 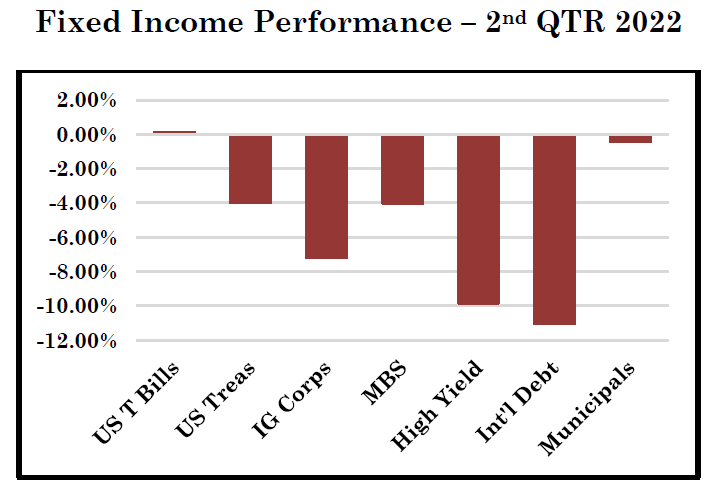 Recession and the Fed

The Federal Reserve has signaled that it will continue to be aggressive in raising the Fed Funds rate, indicating another 175 basis points by the end of 2022 and potentially 25-50 basis points in 2023. As has become more evident, inflation is more broad-based than it initially appeared coming out of the pandemic. Fed Chairman Powell stated recently that the Central Bank is going to keep raising rates until it sees compelling evidence that inflation is slowing down, acknowledging this will produce choppy markets and that a recession is a potential risk.  While it is not the intent to push the economy into a recession, it may be unavoidable as letting prices run/move higher would lead to bigger complications. Whether the Fed needs to take a pause after the September FOMC meeting has been debated more recently. While Producer and Consumer Price Indices continue to show year-over-year increases, there are some signs that economic growth is slowing, not to mention consumer sentiment. Discretionary spending has declined since the first quarter of 2022 as higher prices are causing consumers to reallocate their spending habits to essential items (gas and food). The housing market, which has been booming of late, is experiencing lower demand, a decline in building permits, and a dip in sales as mortgage rates rise. Overall the consumer is on solid ground, but lower levels of household wealth and lower wage growth relative to inflation will dampened demand.

With such a strong labor market, it begs the question whether the U.S. is headed for a recession. While historically recessions are accompanied with much higher unemployment rates (and a variety of other factors), wage growth is a factor having a more recent impact. Even though wages increased over the past year and are seen as a potential source for eating into corporate profit margins, those steady gains have been wiped out for the consumer by higher prices. When taking inflation into account, there has not been a single month with year-over-year earnings growth since March 2021. Overall, growth in the private sector has slowed from post-COVID levels and earnings have slowed, even within industries with high rates of vacant positions. More recently, companies are less inclined to raise wages to fill those vacant positions, which suggests that while labor demand remains high, firms are less determined to fill openings. Concerns that demand for their products may soon fall as the Fed continues to raises interest rates could be allowing those jobs to remain unfilled. Slower wage growth may be a welcome development for firms as profits are squeezed, but more workers will struggle to keep up with inflation and the rising cost of living, therefore curtailing spending and economic growth. 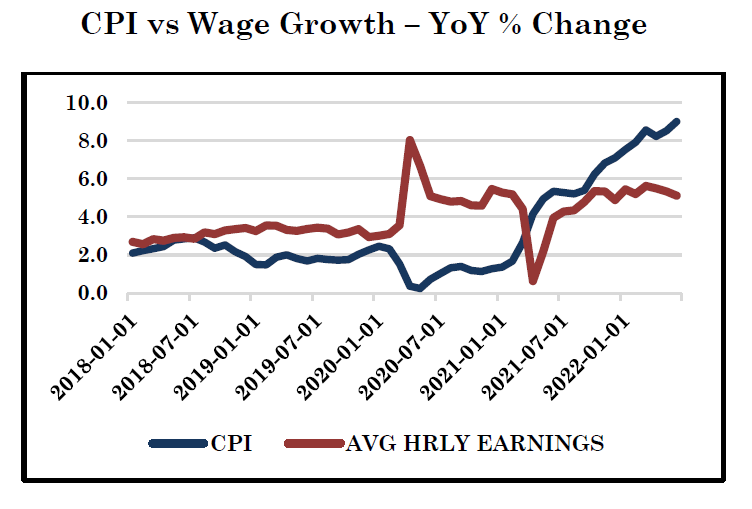 A large number of economists put the probability of a recession within the next 12 months at roughly 30%.  Recessions impose sizable hardship, with large increases in the unemployment rate. But with the current unemployment rate at 3.6%, the dynamic is definitely different right now. If one looks at data such as unemployment, it doesn’t feel like a recession, but the reality is that every economic/business cycle ends in a downturn, whether it is deemed a recession or not. It is not pleasant as an investor or consumer when in the thick of it, but it should be viewed as a normal mechanism to redistribute excesses and the beginning of a new cycle. The real question on investors’ minds is, how severe might the recession be or how long might it last?  While markets and consumers do not function well with uncertainty, the complex economic backdrop changes so rapidly it is hard to predict and we will not know until we are on the other side.

Like most, CWM’s view is that the market environment will remain volatile over the next few quarters. The expectation is for a moderation in inflation over the next 18 months, as financial conditions tighten and economic growth slows both domestically and globally. Corporate earnings will in all likelihood come down, but should still be positive as they navigate through the environment. But a mild recession is certainly not out of the question.  Investors’ memory of the past couple of recessions is all too fresh, as both the pandemic in 2020 and the global financial crisis in 2007-2009 left lasting impressions and some with a different view on investing.  Expectations and circumstances change, but the problem remains: the challenge of getting monetary policy exactly right is a heavier task than many think, given the economic and financial actions of the last decade.

There will always be sectors and industries that can capitalize on the current economic environment. While there may be potential opportunities in those sectors that have historically outperformed as the Fed began hiking interest rates, sector performance is likely to be very inconsistent as the Fed works to fight inflation.  It may appear that focusing on specific areas of the market is the way avoid market downturns. A better strategy is to look through the volatility and pay attention to portfolio construction, making sure one’s investments remain appropriate for goals and objectives. While we have made some minor adjustments to our investment selections (increasing value style equities and reducing bond maturities) we feel our long term strategy of broad diversification remains the appropriate strategy. We continue to focus on building high quality portfolios which will withstand market volatility. Times such as these offer the opportunity for harvesting losses to offset future or recent capital gains. Harvesting a loss is a great way to make useful something that is painful. Investor sentiment is negative at the moment, but it seems that a good portion of bad news has been somewhat priced into stocks and bonds. The S&P 500 has declined more than 15% through the first six months of the year five times since 1932. And in all those instances, the S&P 500 registered a solidly positive return for the final six months of those years. The fact remains that bear markets are a normal part of stock investing and have historically appeared every 6 years on average. Economic cycles come and go and some are more difficult than others, but staying with a long term strategy and staying invested continues to be the best strategy to weather the storm.

Please remember that past performance may not be indicative of future results. Different types of investments involve varying degrees of risk, and there can be no assurance that the future performance of any specific investment, investment strategy, or product (including the investments and/or investment strategies recommended or undertaken by Chesapeake Wealth Management), or any non-investment related content, made reference to directly or indirectly in this newsletter, will be profitable, equal any corresponding indicated historical performance level(s), be suitable for your portfolio or individual situation or prove successful. Due to various factors, including changing market conditions and/or applicable laws, the content may no longer be reflective of current opinions or positions. Moreover, you should not assume that any discussion or information contained in this newsletter serves as the receipt of, or as a substitute for, personalized investment advice from Chesapeake Wealth Management. To the extent that a reader has any questions regarding the applicability of any specific issue discussed above to his or her individual situation, he or she is encouraged to consult with the professional advisor of his or her choosing. Chesapeake Wealth Management is neither a law firm nor a Certified Public Accounting firm and no portion of the newsletter content should be construed as legal or accounting advice. A copy of the Chesapeake Financial Group, Inc.’s current written disclosure statement discussing our advisory services and fees is available upon request.