Global equity markets rebounded in the first quarter of 2019. While overall growth was still positive, it has become more uneven as economies move toward advanced stages of the business cycle. The U.S. is firmly in the late-cycle phase, with earnings declining, growth moderating, inventories growing and wage pressures increasing. Trade talks between China and the U.S. continued. There is no question the tensions have contributed to the slowdown in global growth, but they may be a catalyst to boost markets should a favorable agreement be reached.

The first quarter reported healthy growth in payrolls, averaging a gain of 180,000 jobs per month. The final data ended better than expectations even though weather conditions, furloughed government employees, and the impact on private workers weighed on sentiment. Retail sales picked up at the end of the quarter, reversing the downturn over the past several months. The Federal Reserve left short-term interest rates unchanged at the March meeting, emphasizing slower economic activity. GDP expectations for 2019 were lowered to 2.1% from 2.3%, with a projected rate of inflation of 1.8% and an expected unemployment rate of 3.8%.

Cyclical stocks helped lead the market rebound in the first quarter, with Info Technology outperforming all other sectors. With the emergence of the Communication Services sector last year, the makeup and characteristics of the “old” Technology sector have changed as some companies moved out of IT and into Communication Services. With productivity on the weaker side, the need for upgrading technology and improving efficiencies should bode well for the IT sector going forward. While the trade talks and tariffs remain a concern, the IT sector overall is on solid financial ground.

On the other side of the spectrum, Real Estate was the second best performer of the quarter and one of the top performers over the past 12 months. Real estate is typically classified as a defensive sector, with higher dividends helping to cushion performance in a market downturn. With the recent downward trend in interest rates, (we had been trending higher until November 2018) investors are back seeking yield and will take on more risk to achieve their goals. In addition, office and apartment rental demand has been strong, and borrowing costs are more advantageous. The concern over E-commerce and the deterioration of foot traffic in the “brick and mortar” space may be a little overdone. While E-commerce is growing, according to the U.S. Census Bureau, it only accounted for approximately 10% of retail sales in the 4th quarter. 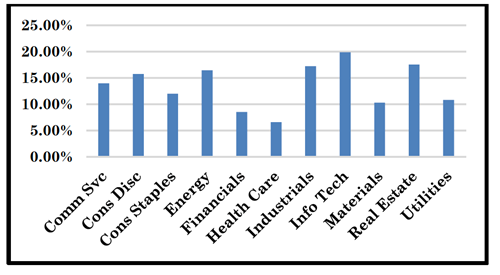 China has been increasing stimulus measures to stimulate their economy. Although the accuracy of their reported data is not always clear, the impact should be evident in the later half of this year. Leading indicators appear to be improving and signs of increased demand and spending should begin to materialize. The trend in the other major Asian countries typically follow suit. As a result, cyclical stocks generally outperform as Asia recovers.

It may surprise most investors, but over the past 20 years, global economic growth has averaged 2.7% annually. Rising globalization, advances in technology and increased trade have contributed, along with strong performance in the equity and bond markets. Analysts are predicting, based upon population and productivity data (output per hours worked), that global GDP growth over the next 20 years will decline and should average 2.1%. The forecast is based on anticipated population growth and changes in productivity.

GDP Forecast for Next 20 Years 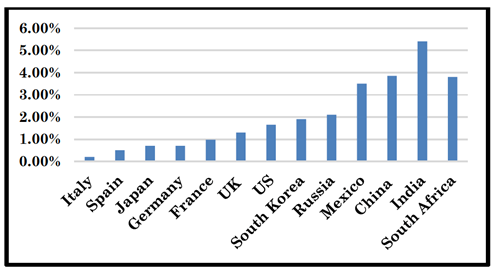 A country’s population makeup and labor participation rate has a direct impact on its output. Longer life spans and lower birthrates in developed countries have resulted in a decline in their labor force. Over the past 20 years, countries such as Japan, the U.S., and portions of Europe have seen a steady decline in population growth and in turn its labor participation rate. In the U.S. there is also the issue of those unemployed having difficulty in finding a job and either taking a part-time job or giving up looking altogether which could skew the data. As the chart shows, lesser developed countries are likely to grow faster, as population growth will increase their labor force.

GDP growth in the U.S. is forecast to grow at 1.6% annually over the next 20 years. It may sound like a low number, but it is in line with other developed countries and should be enough to remain the world’s largest economy. In looking at this from a global perspective, the boost from emerging markets should help offset some of the decline from the more developed economies.

Productivity is one of the most closely watched indicators of long-term prosperity. While forecasts on population growth are more reliable, calculating future productivity is somewhat more complicated. For the most part, a country’s productivity grows as its population grows, and as long as monumental strides in science/educational achievements take place, productivity will strengthen. But as far true advances in output growth, the technology must be innovative. More recent innovations have been focused in the information/communication sectors. Some would argue these have not had the economic impact in comparison to other historical developments and real productivity has suffered, contributing to slower GDP growth. The other side of that argument is that actual productivity is higher than what government statistics report, which data may not be taking into consideration improvements of existing goods and services. In the manufacturing environment, technology’s impact on the value of goods produced compared to hours worked is easy to quantify. But with the increased importance of the service sector to total GDP, measurement has become more complicated. Parameters surrounding the measurement of the service sector focus on the quality of service and customer satisfaction, making quantifying much more difficult and providing another explanation for the longer term decline in global growth in developed economies. All that being said, as long as emerging economies can grow rapidly, they will continue to make up a larger portion of global GDP over the next couple of decades and lessen the worldwide impact. The U.S. will benefit from global increases in productivity.

At the end of 2018, the Federal Reserve had lowered its forecast for future rate hikes from 3 to 2 occurrences for 2019. Moving through the first quarter of 2019, it became more evident that most global economies were in the midst of a slowdown. At the March meeting, the FOMC pivoted its position on monetary policy and indicated they were taking all rate hikes off the table for the year. Their statement focused on a slowdown in economic activity, even in light of a ”strong” labor market, a reduction in business investment, and a drop in inflation expectations. At this point it is difficult to say if the Fed has finished raising rates for this cycle; only economic data will tell. With the change in policy direction and lower growth and inflation expectations, the U.S. Treasury yield curve flattened further and then inverted. The 10-year Treasury yield dipped below the 3- month Treasury bill yield.

Even though an inverted yield curve is a historically accurate predictor of an impending recession, and the bond market gets it right more times than not, this is the only economic indicator implying a recession is ahead. The majority of other economic indicators are not signaling a recession. What the slope of the curve is most likely indicating is that we are in for a lower growth environment with muted levels of inflation, and that the Fed got a little ahead of itself with short term rates. It is worth noting that the yield spread between the 3-month bill and the 10-year treasury had not occurred since 2007, and was short-lived.

With the bulk of 2019 still ahead of us, we have an optimistic view of the markets and the economy. Statistically, after a market downturn of 20%, the odds of a large rebound are about the same as the odds for a continued decline. Fortunately, investors enjoyed a 13% increase in the S&P 500 over the last quarter. As the economy makes its way through the late phase of the business cycle, we would expect domestic growth to slow from 2018 levels. Investors still seem apprehensive as most indices are near their highs and a fair amount of cash remains on the sidelines. Earnings peaked in the 3rd quarter of 2018, and estimates for the 1st quarter of 2019 are mixed and may decline. For the year, earnings estimates are expected to expand in the 5% range and turn higher and back to trend in 2020.

Further rate hikes appear to be off the table. A possible decrease in Fed Funds has been debated. As long as there are no policy surprised from the Fed, and inflationary pressures remain in the preferred parameters, U.S. growth can continue at its current pace. While there will always be external/geopolitical forces that no one can predict, being well diversified across all sectors and asset classes (both equity and fixed income) typically provides more positive long-term results. CWM is a firm believer in portfolios characterized by broad diversification, consistent asset class weightings, prudent tax efficiency, high quality assets, and low volatility. We are keenly aware that each investor is unique which is why we customize portfolios to meet and exceed our clients’ goals and objectives.

Please remember that past performance may not be indicative of future results. Different types of investments involve varying degrees of risk, and there can be no assurance that the future performance of any specific investment, investment strategy, or product (including the investments and/or investment strategies recommended or undertaken by Chesapeake Wealth Management), or any non-investment related content, made reference to directly or indirectly in this newsletter, will be profitable, equal any corresponding indicated historical performance level(s), be suitable for your portfolio or individual situation, or prove successful. Due to various factors, including changing market conditions and/or applicable laws, the content may no longer be reflective of current opinions or positions. Moreover, you should not assume that any discussion or information contained in this newsletter serves as the receipt of, or as a substitute for, personalized investment advice from Chesapeake Wealth Management. To the extent that a reader has any questions regarding the applicability of any specific issue discussed above to his or her individual situation, he or she is encouraged to consult with the professional advisor of his or her choosing. Chesapeake Wealth Management is neither a law firm nor a Certified Public Accounting firm and no portion of the newsletter content should be construed as legal or accounting advice. A copy of the Chesapeake Financial Group, Inc.’s current written disclosure statement discussing our advisory services and fees is available upon request.