The second quarter of 2019 was a little bumpy for the U.S. equity markets. June saw a turnaround and a recovery from the losses from May, primarily due to a shift in the Fed’s tone on monetary policy and renewed hope of a China trade reconciliation. During the quarter, domestic equity markets posted all-time highs. As global growth slowed, the U.S. remained firmly within the late-phase of the economic cycle and many more developed international countries continued to move in that direction. In spite of the historical implication behind the inverted treasury yield curve, the risk of recession remains low. Year to date, the S&P 500 has posted impressive gains of 18.5%. 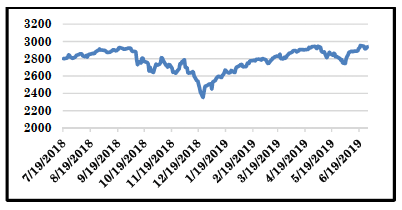 The uncertainty surrounding the trade talks and current tariffs have begun to filter through the global economy. The slowdown in global industrial production continued, and inventories of manufactured goods rose in many regions around the globe. A strong labor market and higher wages has lifted consumer sentiment in recent years. The improvement in wage growth, however, seems to have tapered off, even in the face of low unemployment rates and job gains.

Growth stocks once again outperformed value during the second quarter. Though Financials led with a gain of 7.9%, more growth-oriented sectors such as Technology (+5.8%), Consumer Discretionary (+5.1%) and Communication Services (+5.5%) outperformed the broader market. Health Care (+1.4%), Real Estate (+1.5%) and Utilities (+3.3%) all lagged the broader market. Energy was the only negative sector for the quarter (-2.8%). While the current economic expansion is officially the longest in U.S. history and most observers agree that we are “late-cycle”, there has been little to no evidence that a recession is forthcoming or that growth will slow in any significant manner. Through the first half of the year, Technology, Consumer Discretionary, and Industrials have all gained in excess of 20%.

Trade tensions have lasted longer than most companies had initially anticipated and committing capital in an unsettled backdrop can be dicey. The corporate earnings picture continues to deteriorate as tariffs work their way through the global economy. Companies with higher international revenue exposure are reporting a larger decrease in earnings compared to those with less international revenues. Coming off of 2018, where earnings where in the 20% range, expectations for 2019 were considerably lower. Even with many firms beating second quarter earnings estimates, overall the second quarter is forecast to be negative, as reported by FactSet. Even with weaker an outlook, the S&P 500 is trading at record highs, potentially indicating the U.S. is still somewhat shielded from the effects of the tariffs.

With the Dow, the S&P and the NASDAQ all trading at historical highs, Chesapeake Wealth Management maintains our equity strategy. We believe that being well diversified across multiple asset classes and asset styles provides the necessary portfolio structure to weather various degrees of market volatility. Currently, our sector weightings are in line with the S&P 500 and our exposure to domestic equities outweigh our positions in both developed international and emerging markets. Portfolios are positioned for the long term (dependent upon the clients’ objectives) and proactive adjustments are made when needed. Our conservative approach focuses on active management of quality assets, and longer term economic and political factors drive our overall methodology.

A Note on the SECURE Act

As is Congress’s won't, a catchy acronym must first be created prior to any bill actually being given a name. Hence, we have the Setting Every Community Up for Retirement, or "SECURE" Act, which the U.S. House of Representatives passed very quietly in May by a 417-3 vote. The bill is widely expected to pass the Senate by unanimous consent.

The bill is intended to provide a number of uncontroversial updates to our nation’s retirement rules in light of the reality that lifespans and careers are lasting longer than when many of these rules were set. For example, currently contributions to IRAs cannot be made past age 70 ó, which is also when mandatory distributions kick in. The SECURE Act eliminates the contribution age limit and pushes the mandatory distribution age to 72. Other provisions cover 401(k) plans and their ability to cover part-time employees.

The catch is that changes that are being made to the “stretch” provision that affects inherited IRAs. Currently, the beneficiary of an inherited IRA can stretch mandatory distributions his or her lifetime, allowing for longer tax-free growth and giving legacy-minded investors a path to build family wealth. The SECURE Act will require the inherited IRA to be liquidated within ten years from inheritance, thus speeding up the tax liability. There are some exceptions such as for surviving spouses and heirs who qualify as disabled or “chronically ill”. Overall, this provision could present challenges to those who have significant retirement plan assets and could negatively affect years of careful estate planning.

Bond yields moved lower during the 2nd quarter of 2019, due to slower economic growth, moderate levels of inflation, ongoing trade issues and the potential for rate cuts by the Federal Reserve.

At the FOMC meeting in June, the minutes indicated that the committee would act as appropriate to sustain the current expansion and that “uncertainties” continue to weigh on the global economy. As the quarter came to a close, it appeared that a rate cut (or multiple cuts) was on the horizon in the second half of 2019. The gravity of these “uncertainties” contributed to approximately half of the FOMC officials forecasting a 50 basis point cut by year end. Some argue the reasons for cutting seem less compelling than earlier in the quarter. Economic activity maintains its moderate pace. The consumer continues to be a source of strength for the U.S., according to June Retail Sales data. Spending is strong across retail stores, restaurants, and online businesses. 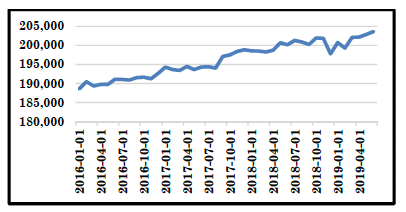 Manufacturing output looks to have bottomed, and job growth remains strong. All in all, the U.S. economy looks pretty good. But, the trade talks with China have the potential to turn negative and damage economic growth both here and abroad. Doing some “insurance cuts” may make some sense, and with inflation continuing to run below the Fed’s target of 2%, a little stimulus may spur an elevated level of growth. Rate cuts that take place in the later phase of the cycle tend to have more varied outcomes than if initiated during the mid-cycle phase. Timing does seem out of sync with historical Fed actions, but the scenarios are different this time. There is also the issue of the upcoming Presidential election. If the markets are going to get more than a 25 basis point cut this year, it may happen sooner than later. Historically, the Fed prefers to back out of the spotlight as the election season nears.

All will be watching the next Fed meeting at the end of July. The markets are pricing in a rate cut, but of special interest will be their language going forward and what the markets can anticipate over the next six months.

The yield curve inversion remained, but spread relationships along the curve changed. The difference between the 3-month Bill and the 2- year Treasury note became more inverted, while yields from 2 years and out transitioned to a more normally sloped curve. The movement of interest rates on the longer end of the maturity spectrum is the result of two primary factors: First, widely followed inflation measures, such as Core CPI, oil prices, raw material costs, and unit labor costs, have trended lower compared to the second quarter of 2018. So, any anticipation of an uptick in inflation is absent. Second, demand for U.S. fixed income assets has kept pressure on rates to remain low. The European Central Bank and the Bank of Japan continue to be accommodative with monetary policy, in an attempt to spur growth in their respective economies. When you are investing in quality, sovereign debt, the major players are the U.S., Germany, and Japan. Comparing the 10-year Treasury at 2.00%, the German Bund at -0.30%, and the Japanese 10- year bond at -0.20%, logically, investors flock to U.S. debt.

Please remember that past performance may not be indicative of future results. Different types of investments involve varying degrees of risk, and there can be no assurance that the future performance of any specific investment, investment strategy, or product (including the investments and/or investment strategies recommended or undertaken by Chesapeake Wealth Management), or any non-investment related content, made reference to directly or indirectly in this newsletter, will be profitable, equal any corresponding indicated historical performance level(s), be suitable for your portfolio or individual situation, or prove successful. Due to various factors, including changing market conditions and/or applicable laws, the content may no longer be reflective of current opinions or positions. Moreover, you should not assume that any discussion or information contained in this newsletter serves as the receipt of, or as a substitute for, personalized investment advice from Chesapeake Wealth Management. To the extent that a reader has any questions regarding the applicability of any specific issue discussed above to his or her individual situation, he or she is encouraged to consult with the professional advisor of his or her choosing. Chesapeake Wealth Management is neither a law firm nor a Certified Public Accounting firm and no portion of the newsletter content should be construed as legal or accounting advice. A copy of the Chesapeake Financial Group, Inc.’s current written disclosure statement discussing our advisory services and fees is available upon request.